Figures on SMEs: Sources of funds

Swiss SME financing is stable, and the situation should not become worse over the next few years. Almost two-thirds of SMEs are financed exclusively with equity, according to a survey conducted at the end of 2016 on 1,922 companies by the State Secretariat for Economic Affairs (SECO). Some 38% of companies also have recourse to outside financing (mortgages, advances on checking accounts, loans, leasing). Finally, 32% of SMEs have credit agreements with banks. As for bank financing applications, only 6% have been denied (Stabile Finanzierungssituation der KMU (only in german)).

There are other ways to raise funds. Approximately forty Swiss SMEs have, for example, issued stocks or bonds on the Bern Stock Exchange, which targets the market of small and medium-sized enterprises specifically, unlike the Zurich stock exchange. As for start-ups, a large number of them use venture capital investors.

Financing of companies in general

Taking SMEs into account as well as large companies, Switzerland has an extremely high rate of stock market financing compared to the rest of the world. It represents more than 200% of the GDP, which is a proportion four to five times larger than bank credit and borrowing, according to the 2010 edition of the Credit Suisse Banks Manual. 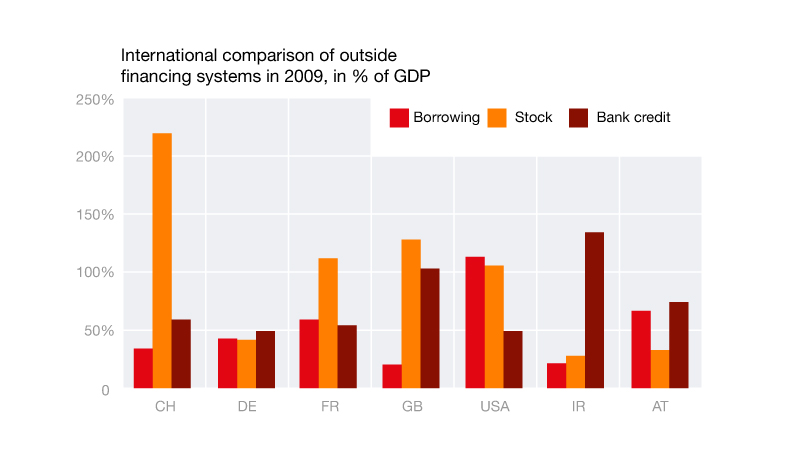 Swiss SMEs that rely upon external funds essentially use bank credit. Below is a presentation of statistics.

Established to facilitate access to bank credit, SME guarantees are rapidly increasing and exceeding the objectives set by the Confederation.

Investments tied to venture capital are well developed in Switzerland. Compared to the GDP, they have decreased slightly in recent years.