To what regions does Swiss industry export and how is the trade balance of the country changing? Here is a presentation of detailed figures.

Exports play a major role in the Swiss economy. Between 1980 and 2021, exports increased almost six-fold from CHF 45 billion to CHF 260 billion, while imports quadrupled, rising from CHF 54 billion to CHF 201 billion, according to the Analysis of Swiss Foreign Trade in 2021 performed by the Federal Office of Customs and Border Security (FOCBS). The surplus trade balance reached a record level of CHF 59 billion in 2021. Of note, immunological products generated a quarter of the export increase.

The United States currently accounts for 18% of exports, compared to Germany's 17%. China is the third most important destination market in 2021 with 6% of exports, according to the FOCBS. 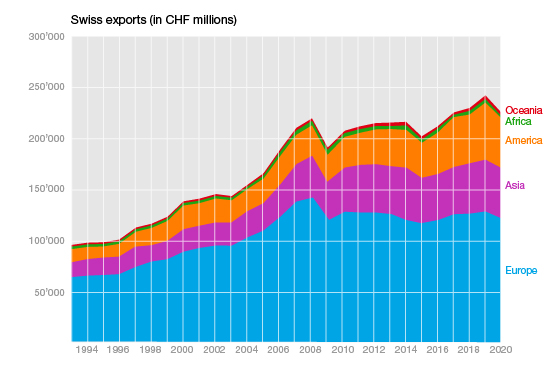 Source: FCA, Exports by Economic Zone and Country of Destination, 2020 (next publication 2022)